popeye of the week 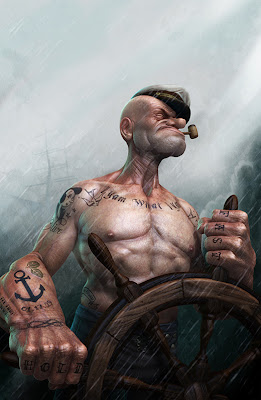 Tattoo on arm - refers to Navy story from New York Naval Shipyard. NAVY PROBES FIGHTS OF GOBS IN N. Y. NEW YORK, Jan. 11.—Fights in New York subways between colored persons and sailors were under investigation by naval authorities last Saturday on order cf Secretary of the navy, Wilbur. • The investigation followed com plaints by the National Association for the Advancement of Colored People. Two speeific case? were cited, one in the Times Square station on New Year's eve. which look 40 policemen to quell and another on a subway train in Brooklyn, on Dec, 31. Rear Admiral Louis R. d^Stei gucr, commandant of the New York navy yard, dispatched radio messages to the U. S. S. Richmond and the U. S. S. Arkansas, ei route to southern waters, instruct Ing the executive officers to con duct an immediate inquiry. Mem bers of the crews of the two ves sels are alleged to have beaten two Negroes in the Dec. 21 disturbance. An Inquiry also was started by the executive officer of the U. S S. Texas, now in dry dock ii Brooklyn, several members of tht |crew of the ship having been nam ed in connection with the Nev ' Year's eve disturbance in which i colored man %nd woman are sale tp have been hurt. Cojnplaiitts of a similar* natun had been received from a score o colored men and women. Rich Centenarian, Ex-Slave, 104, Dies Insurance C o. Directors Lose In Tilt With Officen Directors of the Citizens Life In surance Co., an organization wit! home offices in this city, lost thei fight seeking to mandate the pres' dent, Robert W. Chamblee and th' vice-president, hi. wife, Ruth E Chamblee, to turn over their book; to alleged successors. The com pa ny was represented by Wilhu* Grant and John Royse and th* Chamblees by R. L. Bailey. The suit in Mandate was filed b. attorneys for the company on De cember 12th. Attorney Bailej maneuvered to continue the sui for some time. When the case was heard the court ruled for the plain tiffs represented by Attorney Bail ey. The court held that the com plainants had failed to state facte sufficient to constitute cause o- action.

travel, beats, bikes and all around rock action 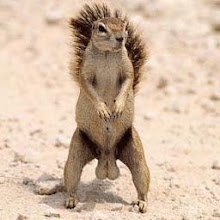